From The Globe and Mail
An increase in the enrollment of women is a driving force behind the growth of hockey as a sport. 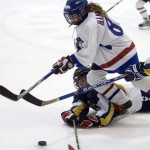 The face of hockey is changing swiftly across Canada. To get a sense, one need only look at enrolment – this year, 85,000 women are playing in organized leagues, a tenfold increase since 1990.

The sport continues to grow across the board, but it’s women who made up 58 per cent of the Canadians who’ve taken up the sport in the past decade. Olympic gold medals, high-profile stars, a disappearing stigma, athletic scholarships and a surge of adult women taking up the game (one they never could as girls) are driving the growth.

The women’s game will reach another new height Monday, when the Hockey Hall of Fame shatters the gender divide and honours Angela James and Cammi Granato as its first female inductees.

“For me, growing up, I didn’t have female players to look up to,” says Ms. Granato. “As you get older, you start to realize it. You realize you’ve paved the way, and it’s really cool.”

Now, they hope to take the next step – a professional league. It won’t be easy.

“That has really been our dream,” says Sami Jo Small, 34, a two-time gold-medal-winning goalie who is pushing for a pro league. “Canada has come far, but we still have a ways to go as well.”

The recent growth can be traced to the International Ice Hockey Federation’s first women’s tournament, held in Ottawa in 1990. That’s the first year Hockey Canada kept figures for the number of women playing the game: 8,146. The tournament was a breakthrough, though. The next year, hockey registration by women jumped 39 per cent.

Both Ms. James, a Canadian, and Ms. Granato, an American star who now lives in Vancouver, played in the tournament. The Canadians wore pink jerseys to drum up interest.

Another breakthrough came in 1998, when women’s hockey became an Olympic event. Enrolment spiked 30 per cent the next winter in Canada. Since then, the stardom of players like Cassie Campbell and Hayley Wickenheiser have elevated the game’s profile since those players began their careers.

“It’s night and day in this country to be a female hockey player,” Ms. Wickenheiser told a hockey summit this summer.

A ruling that forced the U.S. National College Athletic Association to increase the number of sports scholarships for women is credited with keeping a young generation playing – the scholarships far outpace anything Canadian schools can offer.

The CWHL is one of a handful of fledgling leagues. Compared to the celebrity status of men’s stars and the paycheques that come with it, the CWHL and its Western Women’s Hockey League counterpart are hardly glamorous work – it doesn’t pay players (many of whom are Olympic gold medalists) and only recently signed a deal to get them new equipment.

Nearly all of the two leagues’ players keep full-time jobs, but play for fun and at a level they wouldn’t get in a recreation league. One such player is Erin Duggan, 27, captain of the WWHL’s Edmonton Chimos. A Yale and Harvard graduate who played hockey all her life, the Chimos team is a natural fit. Ms. Duggan played on men’s teams until she was 17, because there was no other option in her town.

“I was always the only girl in the league. And it’s definitely a guy’s world when you play on a guy’s team, for sure. But I grew up in a small town so a lot of those guys were my buddies… they’re all more like my brothers,” she says, adding players like Ms. James and Ms. Granato are pioneers with a well-deserved spot in the Hall of Fame.

“It’s just that sense of recognition in a man’s world. It’s impressive. They’ve both done extreme things for the women’s game.”

Women’s teams in Canada play for the Clarkson Cup, named for former governor-general and women’s hockey advocate Adrienne Clarkson. They play international tournaments, such as this week’s 4 Nations Cup in Newfoundland, which pits Canada against the United States, Sweden and Finland.

And people are watching – 19 million viewers took in some part of the women’s Olympic gold-medal game. That’s more Canadian viewers than watched part of the Super Bowl, TV sports’ biggest and glitziest event.

Many agree that a pro league, with a concentration of high-quality players, will do wonders to build the profile of the women’s game. Getting there is a monumental task.

Girls are often drawn in for different reasons than boys – by family role models and friends, as opposed to National Hockey League stars.

When teenager Megan Webb quit figure skating six years ago, she was looking for another sport. Her brother played hockey, so she took it up, too. Though Ms. Wickenheiser and other pioneers faced questions about hockey being a sport for boys, Ms. Webb hasn’t had any such comments.

“So many people play. If someone asked me, ‘Oh, what sport do you play?’ I say hockey and they say it’s kind of cool,” says Ms. Webb, 13, a bantam defender.

Her father, Phil Webb, has taken over co-ordinating the 110 girls in the St. Albert Minor Hockey Association, located in a suburban Edmonton community of about 60,000 residents. It serves as a hub for girls from across rural central Alberta. “We’re still bringing in players, trying to help out as many girls as we can,” says the 44-year-old Mr. Webb.

“As a generation of women started to play and excel, such as Cammi and Angela, they became heroes, role models to a younger generation that wanted to pick up a hockey stick and play,” Ms. Small says. It’s a far cry from when she began playing.

“I never saw another little girl play. There wasn’t an Olympic team, there wasn’t a national team – we didn’t have dreams within the game,” she says. “There’s now just a greater acceptance of girls playing. You don’t even balk at a girl carrying a hockey bag into a rink.”

With a report from Matthew Sekeres in Vancouver

Editor’s note: This version includes statistics showing the growth in the number of women playing hockey in Canada and an interview with Erin Duggan.

Angela James and Cammi Granato are inducted into the Hockey Hall of Fame. TORONTO – Thanks to Angela James and Cammi Granato, women are finally in the Hockey Hall of Fame. But the breakthrough moment comes at a time when female players are still defending their game. “It just comes with the territory because we’re… END_OF_DOCUMENT_TOKEN_TO_BE_REPLACED

From The New York Times Women’s hockey officials and NHL officials confirmed Thursday that they had discussed the possible formation of a women’s league http://www.nytimes.com/2010/08/27/sports/hockey/27women.html?_r=1 END_OF_DOCUMENT_TOKEN_TO_BE_REPLACED

The Brooklyn Blades Ice Hockey Club is a volunteer-run program that has been running community ice hockey programs in the NYC area since 1992.The Women’s program consists of a National D Level Travel Team. We play approximately 16 games against local women’s teams located in Long Island, Westchester County and northern New Jersey, with our home ice located at the Richard L. Korpi rink at the Bayonne High School, in Bayonne NJ.